A recent poll shows that a majority of Americans who voted in this year’s election want to do away with the Electoral College, that archaic holdover born at a time when the founding fathers wanted to placate southern slave states so they’d get on board with the new Constitution.

The founding fathers had different ideas for the Electoral College. For some, the idea was to ensure smaller population states (like slave ones) wouldn’t be outvoted in every election. (It’s also the genesis of the infamous “three-fifths clause.”) It wasn’t so much about states’ voting power as it was protecting the south from the north.

Another idea was that the College could be a fail-safe mechanism in case the people voted for a criminal, an idiot, a fraudster, or someone who wasn’t qualified to lead the nation.

Whatever the intent was, it’s an idea fraught with problems. The most glaring fault is when the EC goes counter to the popular vote, as it did this year with Hillary Clinton receiving some 2.8 million more votes than Donald Trump, not a small margin. Many feel the current mechanism violates the principle of one person one vote, as it gives people in smaller states much more voting power than people in larger states. 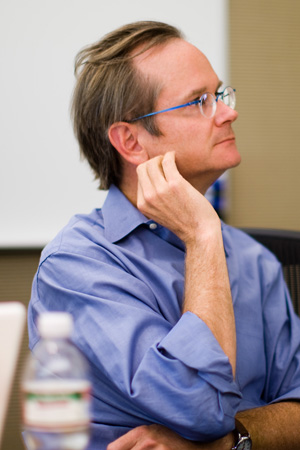 Problematic as it is, getting rid of the College would require a constitutional amendment, and that’s not likely to happen anytime soon. But it can be reformed. It can be made fairer. It can be amended so that it more accurately reflects the will of the people.

Last week I spoke to Lawrence Lessig, the Roy L. Furman Professor of Law at Harvard Law School and the former director of the Edmond J. Safra Center for Ethics at Harvard University. He acknowledged that the Electoral College won’t be consigned to the dustbin of history in the near (or maybe far) future, but he shared a couple of ideas for reform that might correct the faults.

The first way is for states to abolish “winner take all,” the principle where the state popular vote winner (even if it’s just by one vote) gets all of that state’s electors. He said there’s already a group of people preparing litigation to challenge the principle immediately after the election. If the Supreme Court rules that it’s a constitutional violation, and Lessig thinks it would, then the EC and the popular vote would more fairly align. So far, only two states have done away with “winner take all.”

But Lessig was more excited by another idea for change, one that could reform the EC without litigation or a constitutional amendment. He explained:

Lessig said he has high hopes for this idea.

[…] they’re actually on their way to getting to 270, and I’m sure this election cycle is gonna re-energize the movement towards that solution. I wouldn’t be surprised if by the time we get to the next election the possibility of this “loophole presidency” will have been removed.

Both of these plans are more workable than abolition, though I must say the best idea is to do away with the Electoral College. Every other elected office in the United States is chosen by popular vote. The presidency should be, too.

(There are some who defend the EC despite its inherent unfairness. The three most common defenses are debunked here. I present the link for additional reading.)