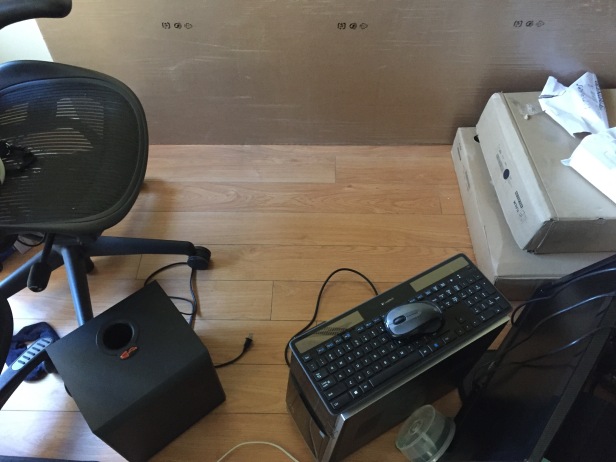 Rumors of the existence of a floor were confirmed yesterday – floor sighted. And more of it may exist than previously believed.

Couch assembled after a herculean effort. Blessings were asked of the great god Ikea and were apparently granted. Assembly surprisingly did not require more than an average number of whispered (because of laryngitis) expletives. A desk may be next.

Coffee maker and coffee found, but not sugar. The coffee gods are obviously unconcerned with the fact that I am of British stock and am not permitted by international law to drink unsweetened coffee or tea. Fortunately, this is Glendale north of the 134 and probably 5 or 6 Starbucks can be sighted from the roof.

Thing learned: Dust allergy can cause laryngitis, sparing neighbors my expertise in connecting disparate expletives in new and exciting ways, albeit unappreciated by the literary community.

Other thing learned: Jumbo means the same thing as extra large when it comes to litter box liners.

Other other thing learned: Lionheart has an extra large, jumbo size litter box. He is obviously overcompensating for some other perceived shortcoming.