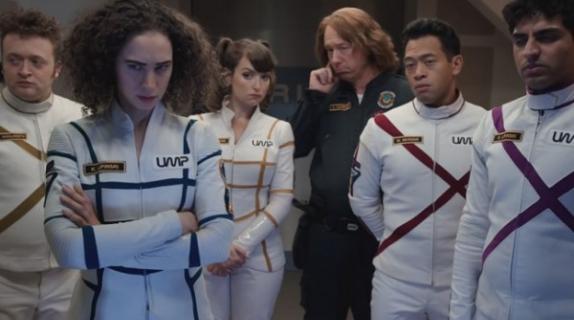 I finally got around to checking out some of the original TV shows on Yahoo Screen. Yes, I know I’m late to these particular parties, and Yahoo doesn’t make the same kind of splashes as new shows on Netflix do, but I had some downtime and I was bored enough to dive in.

I loved Community when it was on NBC, even that disappointing season when the creator left the show. But its rebirth on Yahoo is, damn, I hate to say it, utterly bland and not very funny. It’s trying WAY too hard to be Community but the attempt feels lifeless. Maybe it gets better but I’m not inclined to watch any more.

On the other hand, Other Space is completely lovable in the way Community was when it began. I’m hooked on it the same way I’m hooked on Unbreakable Kimmy Schmidt on Neflix. Other Space is worth checking out. It’s Star Trek (cheap sets and all) meets quirky workplace sitcom. It’s a formula that’s been tried before with disastrous results (Quark, I’m talking to you) but this one works on the strength of its characters.

(There’s a Roku app for Yahoo Screen but it’s not very dependable. You’ll have more luck just watching on a computer.)