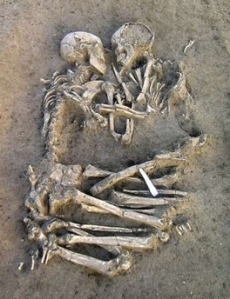 A pair of human skeletons lie in an eternal embrace at an Neolithic archaeological dig site near Mantova, Italy, in this photo released February 6, 2007. Archaeologists in northern Italy believe the couple was buried 5,000-6,000 years ago, their arms still wrapped around each other in a hug that has lasted millennia. REUTERS/Enrico Pajello/Handout (ITALY).